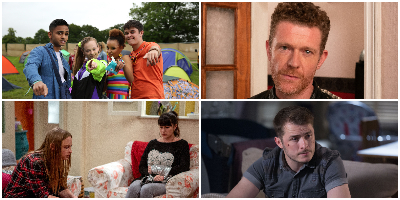 SEB IS NAILED BY THE TRAFFICKING GANG Seb asks Faye to go the salon and give a note to Alina. When another girl does her nails Faye asks her to pass Alina the note. Seb is delighted when he gets a text from Alina asking him to meet her at the salon after work but as he arrives he is confronted by Nikolai.

ROBERT TRIES TO PERSUADE VICKY TO STAY Robert arrives at Vicky’s to find Jed there and Vicky packing her bags, as the two men square up to each other Vicky tells them to leave her alone whilst she makes her decision.

IMRAN’S UNDERHAND AS HE BUYS CLAUDIA OUT Imran uses insider information to offer Claudia £10k under the asking price for her flat – he knows the bail hostel plans have been dropped but she doesn’t.

ELSEWHERE Taking out a wad of Rick’s money, Gary stashes it in a desk drawer, before heading off on some dodgy business leaving Ryan to mind the furniture shop. In the corner shop, Mary’s shocked to discover Evelyn is marking the prices down on goods she wants to purchase herself. When Mary threatens to report her to Dev, Evelyn bars her from the shop.

SEB SUSPECTS HIS SECRET SAVIOUR Jan drives an unconscious Seb to hospital leaving him in A&E. Abi gets a call to say Seb is in the hospital, Eileen rings Jan who says he is working in Birmingham. The two women rush to the hospital to see Seb.

GARY’S NEW SHOP TAKES A LOSS Gary’s impressed when Ryan reveals that while he was out, he sold two pieces of furniture for £200. A clearly agitated Gary tells Ryan that there was £650 hidden in the desk that he sold. Ryan’s apologetic and reveals that Mary bought the desk for the flower shop.

EVELYN SPIES NEW MONEY MAKING SCHEME Mary tells Tim how she caught Evelyn altering the prices in the shop. When Tim suggests she could do with more evidence, Mary asks him to do some snooping on her behalf. When Tim confirms he couldn’t find any evidence of Evelyn’s dodgy pricing scam, Mary’s disappointed. Having found out from James that County’s game tomorrow promises to be a disaster as the goalkeeper’s gone down with a stomach bug, Evelyn uses the information to her advantage and has a £20 wager with Tim that County’s keeper won’t even make the team.

ELSEWHERE When Imran reveals that the bail hostel plans have fallen through but Claudia’s blissfully unaware, Toyah’s deeply uneasy to realise he intends to rip off a neighbour.

The whole Square is rocked by the news of Phil’s attack and as some people panic and try to cover the truth, tensions run high and people start to point fingers. As one person gets arrested, another resorts to shocking and dangerous lengths to cover their tracks.

After complaining to Honey for playing loud music and realising it was Janet, Ruby is wracked with guilt. As she explains what happened to Max, Ruby later gives Janet a gift to apologise. Meanwhile, overhearing Ruby and with Ollie on her mind, Linda overreacts leaving Ruby stunned and as the row escalates, Mick enters and diffuses the situation with Linda heading home. However, after an incident with Ollie Linda and Shirley later berate Mick. But once alone, it’s clear Mick is feeling the pressure.

Elsewhere, Sheree makes herself a little too at home much to Denise’s annoyance but after some coaxing from Patrick, Denise backs down. Callum struggles to write his vows and knowing how excited Whitney is to hear them only makes him feel worse.

Kerry encourages Amy to act normal, still in denial whether they actually caused the devastating fire, but later when the factory safe is opened and the money they stole is found to be missing Kerry struggles to contain her guilt.

Nate’s disappointed when Pete reveals Moira has gone away to Nana Barton’s.

Romance blossoms and feuds intensify at a music festival.

It is Laurie’s day in court, but will he be punished for his actions?