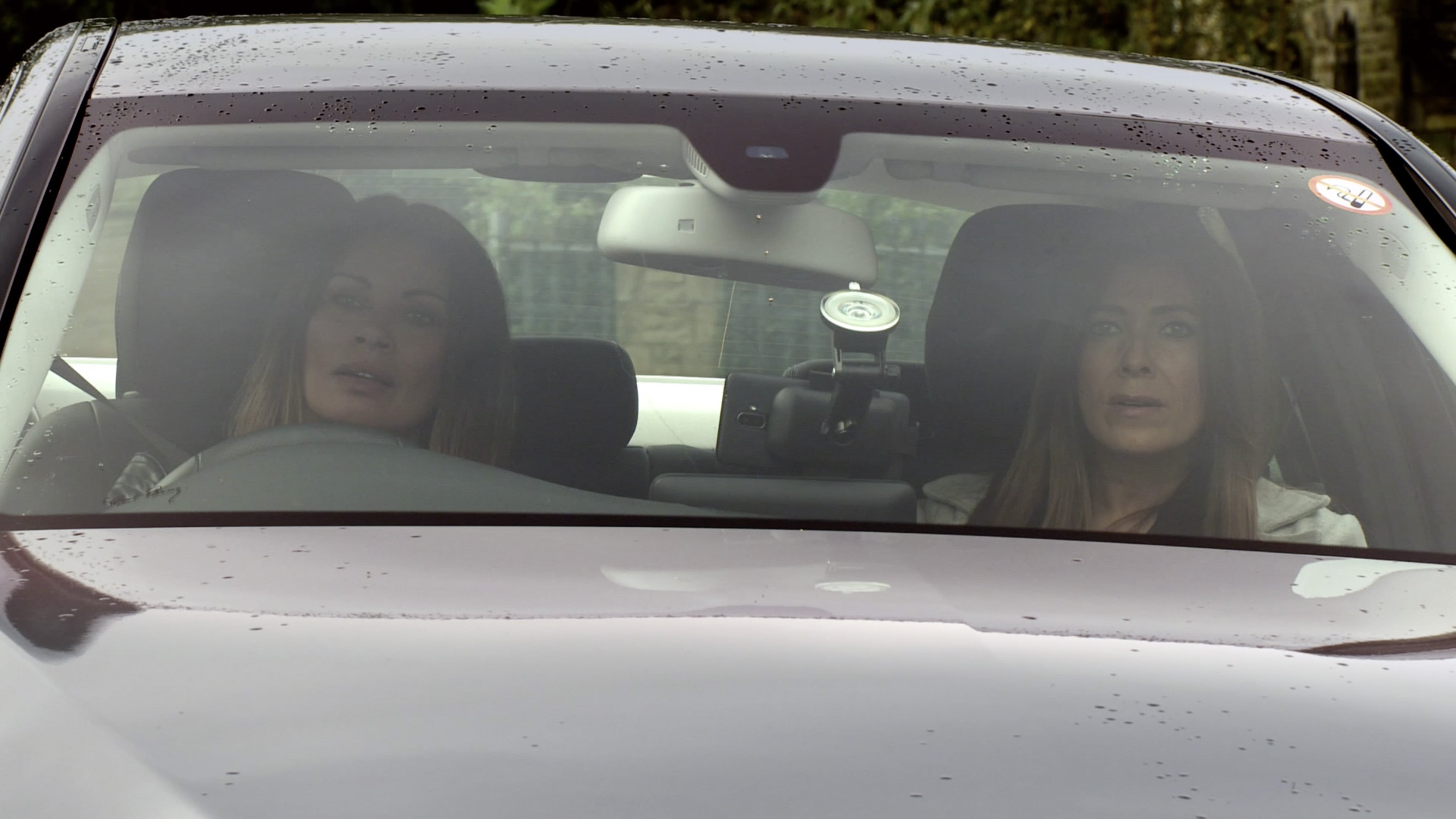 ROBERT HOLDS NO TRUCK WITH THE TRUTH Michelle warns Alya to watch herself with Ray and ensure he makes no advances. A furious Ray covers when questioned by Alya before heading to see Michelle and issuing her with a letter for breach of contract and defamation. Meanwhile Robert has called to placate Tyler over the Amy situation but as he is driving home from Vicky’s he is distracted by a call from Michelle telling him about Ray and crashes his car.

ROY REVEALS THE TRUTH Roy explains that his obsession with the online Scrabble comes from the fat that he believes his online playing partner is his brother and he has suddenly disappeared in the middle of a game which is out of character.

MARIA GOES TO BAT FOR ALI Emma approaches Dr Gaddas and begs her to go easy on Ali at the meeting. Maria backs her up, pointing out it was one stupid mistake. Dr Gaddas gives nothing away and heads off.

GEMMA AND CHESNEY GET A SURPRISING OFFER Gemma and Chesney are approached by the marketing manager from Frescho who wants them and the quads to be the face of the supermarket.

ELSEWHERE Yasmeen implores Geoff to come with her to Vegas, but he heads out without bothering to reply leaving Yasmeen upset.

MICHELLE WONDERS IF BIG DADDY IS A BIG BADDIE Desperate Michelle can’t get back through to Robert but when the police call her from his phone she is stunned to hear he has been in a serious accident and baffled as to why he is being taken to Macclesfield Hospital when he was supposed to be in Sandbach. At the hospital she can’t understand why Robert is asking about a baby and then she spots his big Daddy necklace nest to the bed. Is the game up for Robert?

ROY PLAYS LONG LOST FAMILIES Roy confides in Carla how he did some research and discovered his mother had a son, Richard, as a result of her affair and put him up for adoption. When Roy reveals that he has an address for Richard, Carla insists they should track him down. Roy is surprised when a young woman answers the door and denies knowing anyone called Richard. Back in the house Nina tells her dad Richrd that it was just someone collecting for charity and they can carry on with their game of scrabble.

GARY BUYS MARIA’S AFFECTION Gary masks his jealousy as Emma tells Ali how Maria stuck up for him with Dr Gaddas. Gary turns up at Maria’s with a designer handbag but when she questions how he can afford it he is forced to lie that it is a fake.

ELSEWHERE Geoff returns home to find Yasmeen with their bags packed, hopeful they can still make the flight. Geoff tears a strip off her for doing his packing and accuses her of being controlling. Having finally agreed to go ahead with the holiday, Geoff loads the cases into the taxi. Alya hugs Yasmeen and wishes her a lovely time. Gemma and Chesney return home only to receive a call from the hotel in Llandudno telling them they owe £500 for extras. Gemma opens the fridge door to find it stuffed with miniatures. A sheepish Bernie explains that she thought they were free.

ROBERT IS SANDWICHED BETWEEN TWO WOMEN Michelle tells Carla her suspicions about Robert’s whereabouts, the baby talk and the necklace but when she quizzes him he is able to plausibly answer her questions. Meanwhile one of the midwives recognises Robert and when Vicky comes for a check up she tells her has has been in an accident! As she rushes to be by his side Robert masks his panic.

ROY’S UP AGAINST TIME Roy and Carla go back to Richard’s and are let in by a care worker who reveals Richard is suffering from pulmonary fibrosis. Nina is less than impressed to find them there but Roy simply says he is his online Scrabble opponent.

GEMMA AND CHESNEY SEAL THE DEAL Knowing they need to pay the hotel bill Gemma and Chesney agree to meet Tara to discuss the Freshco offer. They are stunned when they are offered £60k

ELSEWHERE Fed up of Steve and Amy’s continual sniping, Emma suggests they take it in turns to pick something fun that they can all do together. Steve has first pick.

ROBERT CAN’T CON A CONNOR It’s a day of musical chairs in Robert’s room as he tried desperately to get rid of both Michelle and Vicky before they bump into each other. Will he succeed?

ROY SCORES WITH HIS BROTHER Roy and Carla pay Richard another visit and this time Roy comes clean about who he really is. How will his half brother react? Meanwhile Carla tells Nina she would be lucky to have Roy in her life but prickly Nina is not convinced.

BERNIE HAS HER EYES ON THE PRIZE Chesney, Gemma and Bernie celebrate their windfall with a drink in the Rovers. When Bernie suggests they should book a holiday, Gemma refuses, adamant that the needs of her babies come first.

ELSEWHERE Steve, Tim, Emma and a reluctant Amy set off to the County match. Having enjoyed the football more than expected, Amy reveals that her fun night out of choice is a Little Mix gig. Emma’s thrilled whilst Steve’s not so keen.

ROBERT UNWITTINGLY EXPOSES HIS SECRET TO MICHELLE Robert goes to see Vicky to tell her it is over unaware that Michelle and Carla have his phone and have followed him to the address. Is the game finally up for Robert? Back in Weatherfield Michelle finally confronts Robert about his pregnant girlfriend, can Robert talk himself out of this one? Michelle goes to see Vicky, what will she tell her?

DANIEL’S OUT ON THE WILD AND WINDY MOORS Ken and Claudia return from Scotland having failed to find Daniel. Peter eventually gets hold of him and he admits he is in Cheshire. As he sits on a blustery hillside in contemplation he is surprised to find Peter alongside him. Peter implores Daniel to come home, pointing out the worry is taking its toll on Ken and with Sinead gone, Bertie needs his family more than ever. Has he done enough?

BILLY TRIES TO PLAY PEACEMAKER When Bernie reveals that Kel’s due back today and suggests a family meal, Paul’s far from happy and asserts that he won’t be attending. When Billy offers Bernie a cleaning job at the church, Gemma insists she accept it. Having enjoyed a meal together, Kel kisses Bernie goodnight. As he heads off, Billy warns him to stay away from No.5 and certainly from Joseph or he’ll regret it. Kel’s left shaken.

ELSEWHERE When Emma declares that she’s feeling better and it’s time she moved back home, Amy’s saddened, wishing her sister would stay forever. In a bid to delay Emma’s return home, Amy trips over on purpose and fakes a sprained ankle. Emma helps Amy home and points out that with her injured ankle, they won’t be able to attend the Little Mix gig. Amy’s gutted. Desperate not to miss out on the Little Mix gig, Amy reveals to Emma that there’s nothing wrong with her ankle and she faked it in the hope she wouldn’t move out. Emma assures Amy that they’ll always be sisters and she’s welcome to stay over at her flat whenever she likes. When Emma suggests they get ready for the gig, Amy’s chuffed.