After weeks of wondering Who attacked Connie? We finally get a look at the fiend responsible when she comes face to face with him again. Duffy admits to her colleagues about her dementia. 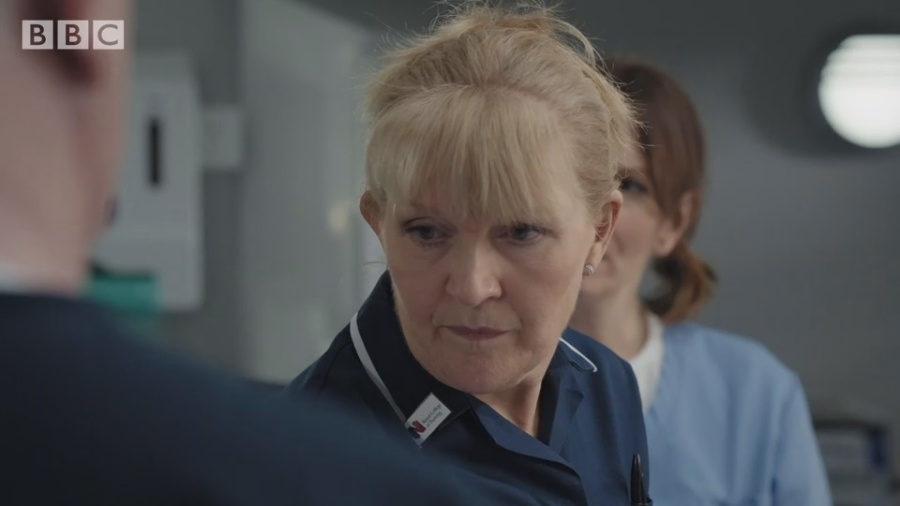 Not feeling secure in her own home Connie is having trouble sleeping because of her anxiety following the attack and is exhausted.

Following an argument with Bill (David Sterne) Ruby and Jan pick up Maureen (Melanie Kilburn) who had fallen down the stairs but the shiftiness makes them suspect that Bill might have pushed her.

Bill gets distressed when he hears that Maureen will be taken to Holby hospital and Connie treats Maureen, who recognises her name despite them never having met.

Unable to stay away, Connie recognises Maureen’s partner Bill when he arrives in the ED. She remembers treating his late wife, Naomi.

Bill is rude to Connie who is surprised to hear just how much he hates and blames her for the death of his late wife. Noting his aggression, Connie lets Elle know of her suspicions that Bill is her attacker but thinking that Connie might be paranoid, Elle encourages her to wait for more evidence.

As Maureen deteriorates Connie tries to treat her but Bill becomes aggressive, not wanting Connie anywhere near Maureen. In the heat of the moment, Bill even admits that he attacked a stunned Connie.

Knowing that Bill will soon be behind bars, Connie seems to be back to her old self brushing off Elle’s concerns. But at home alone, Connie is more terrified than ever.

Following recent events, David approaches Charlie to apologise about what happened. Charlie accepts the apology but gets concerned when David suggests talking to Fletch about staffing levels and Duffy.

Charlie finds Fletch and accuses David of aggression in the workplace. David is distraught when he is called to meet with Fletch and admit that he did, in fact, push Charlie. He thought that he cleared things up but now faces a possible suspension. When David begs Charlie to re-consider, Charlie turns his back on him, resolute.

David packs up his locker believing that he is not fit to work. Robyn finds him and annoyed that he won’t fight back, confronts Charlie, reminding him that ED means everything to David.

Duffy is heartbroken to see, David, leaving the ED with his things. Putting an end to the secrecy once and for all, Duffy stands up in Admin and tells everyone that she is living with dementia.

Ruby starts to get uncomfortable when Dani keeps turning up out of the blue.
Jan and Ruby discuss Iain’s return.
Jade’s nursing registration comes through.