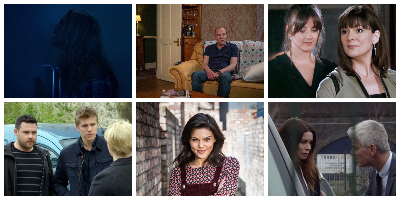 In Coronation Street: Kate meets up with Imogen. When Imogen reveals her plans to travel the world, Kate’s envious and Imogen suggests she should come with her. Jenny’s incensed when Kate asks her dad for £3k to fund the trip. Kate’s hurt when Jenny jokes to Tracy that she’s finally getting rid of her stepdaughter.

Paula assures Sophie she’s genuinely sorry for causing her family grief and really does love her. Will Sophie soften towards her?

Kevin refuses to forgive Paula and makes it clear she’s not welcome at No.13. But after some wise words from Tim he relents and tells Sophie that if Paula makes her happy then he’s not going to stand in their way.

Carla walks in on Robert on the phone to Vicky but he says it was Young offenders confirming his start date. Keen to get her out of his hair he promotes Kate to manager asking her to tell the family Carla turned it down. Carla is bemused and tackles Robert questioning how he got his job with young offenders as he has a criminal record, Robert is flustered and when his phone pings with a message Carla picks it up! Is the game up?

In Emmerdale: Robert has been trying to persuade a reluctant Aaron to go ahead with the surrogacy but when they hear Natalie’s having second thoughts will Robert come clean to her over what has gone on?

The day after the Wild West, Amy and Kerry are desperate to get the money they need and soon, Kerry’s thoughts are drawn to the charity money in the factory safe.

Before long, she’s setting off the fire alarm and stealing the cash from the safe whilst no one else is there.

Later, Kerry is horrified to realise she has been caught on the CCTV and Amy tells her they must cover their tracks. Once back in the factory, they set about sabotaging the CCTV and leave, but unbeknownst to them the damage to the CCTV starts a fire.

Tracy and Billy continue to flirt but could it get Tracy into danger as she waits for Billy in the factory store room?

Outside the Village Hall, Amy hands over the money she owes, and she and Kerry walk away together, hopeful the nightmare is over. But back at the factory, the fire begins to spread. Locked in the storeroom a panicked Tracy tries to get out and soon, the villagers are rushing to the scene. The fire rages and the next day, the Fire Investigators and the police sort through the ruins left by the fire.

Jai is determined to get to the truth. Back at the Woolpack, Kerry is sure that she and Amy aren’t to blame for the fire, and Amy desperately hopes she’s right.

In Fair City: Poor Heather hasn’t had the easiest time in Carrigstown lately but happier times could be ahead when Heather and Renee share a teary farewell before she leaves for Brazil. With Heather gone how will Hughie cope now he is all alone.